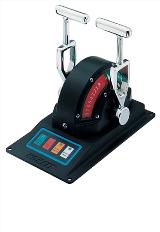 The 6508 is an illuminated control head, constructed from bronze and stainless steel but for interior use only.  It typically comes mounted on a 4 switch base, allowing for similar functionality as the 6509.

This controle can be equipped with two potentiometers per handle. Which is allowing the second to be used as a spare or backup.

It is capable of being used in multiple control head configurations and suitable for a Mighty Mariner system or a 6525 system.